Here's the thing: Transport Management Sims certainly are nothing new. Heck, since the nineties, games such as Sid Meier's Railroad Tycoon have been popular among gamers and often spawn numerous, also well received sequels. So what is it Mini Metro adds to the table which makes it stick out in the crowd?

Well, most games in this genre stick to the same tried and tested formulae: start your business small and build it into a vast corporate entity, slowly beating competitors until you alone operate your city's transport system as a monopoly. Mini Metro, however, lays its tracks in a different direction. From first glance you can tell the game is not like other transport games; instead of aiming for realistic graphics, the game elegantly emulates the subway map style invented by Harry Beck for the London Underground in the 1930s and copied to become the world's de-facto standard for transport maps. This gives the game a strikingly beautiful look: straight, brightly coloured lines weave their way from station to station, perfectly capturing Beck's minimalist design which for decades has perfectly joined both function and form. 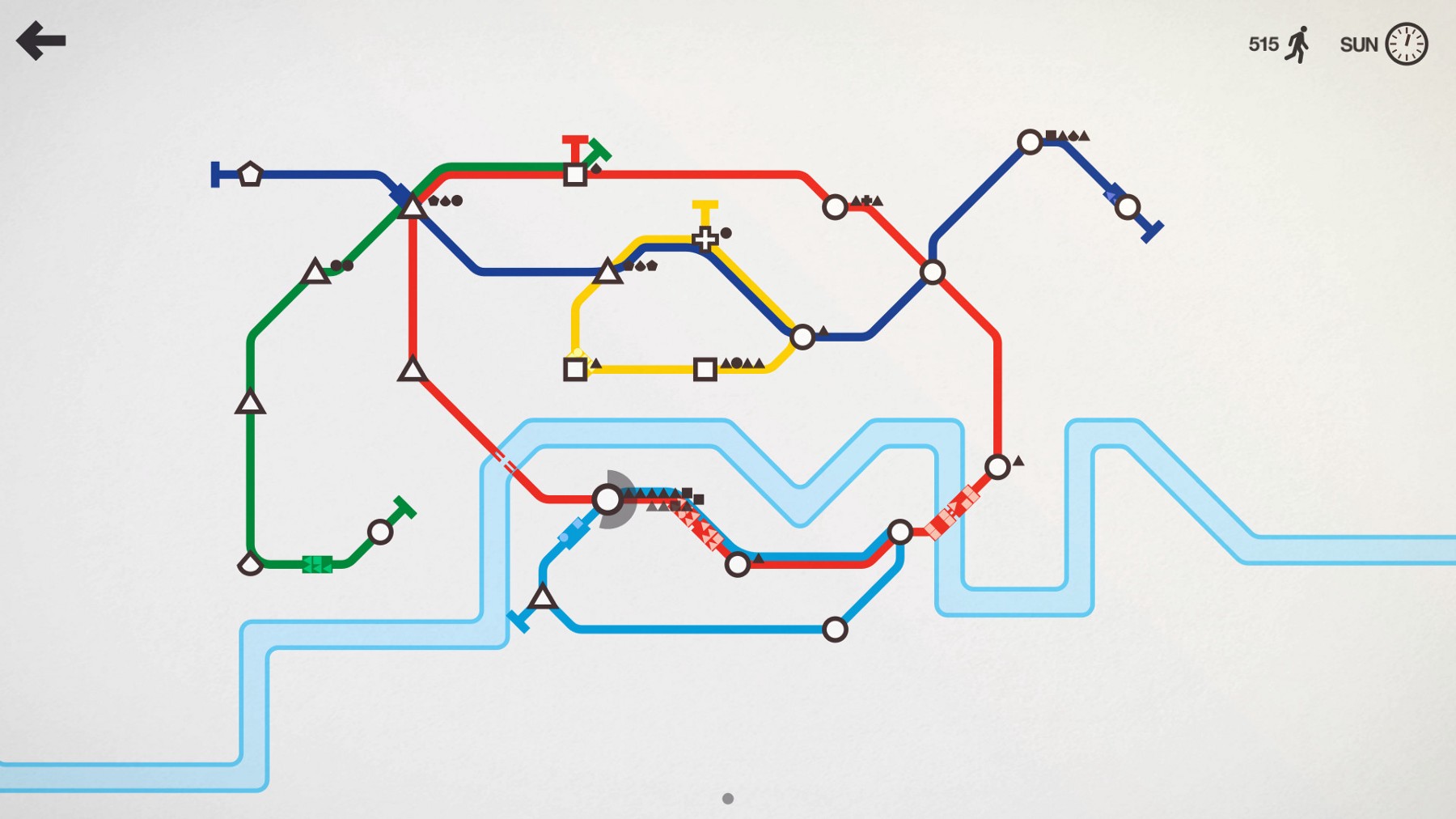 It's not just looks which separate Mini Metro from other transport simulators. The game puts aside the economic aspect of managing a transport network and makes all tracks free to place, and other elements, such as lines, locomotives and tunnels to traverse around rivers, being unlocked over time. The objective of Mini Metro is to prevent overcrowding: with each individual person being represented by a shape corresponding to the type of station that they need to get to. In most cases there are multiple stations for each to go to: for example, a "square person" can go to any of multiple square stations scattered around the map. This mechanic encourages the player to build varied lines with multiple different station types on them: a task easier said than done as over time similar stations spawn close together, causing the player to choose whether to connect them with one line or to thread multiple lines through the area in an attempt to spread the load. It works well, forcing the player to adapt to the map or face a game over screen. 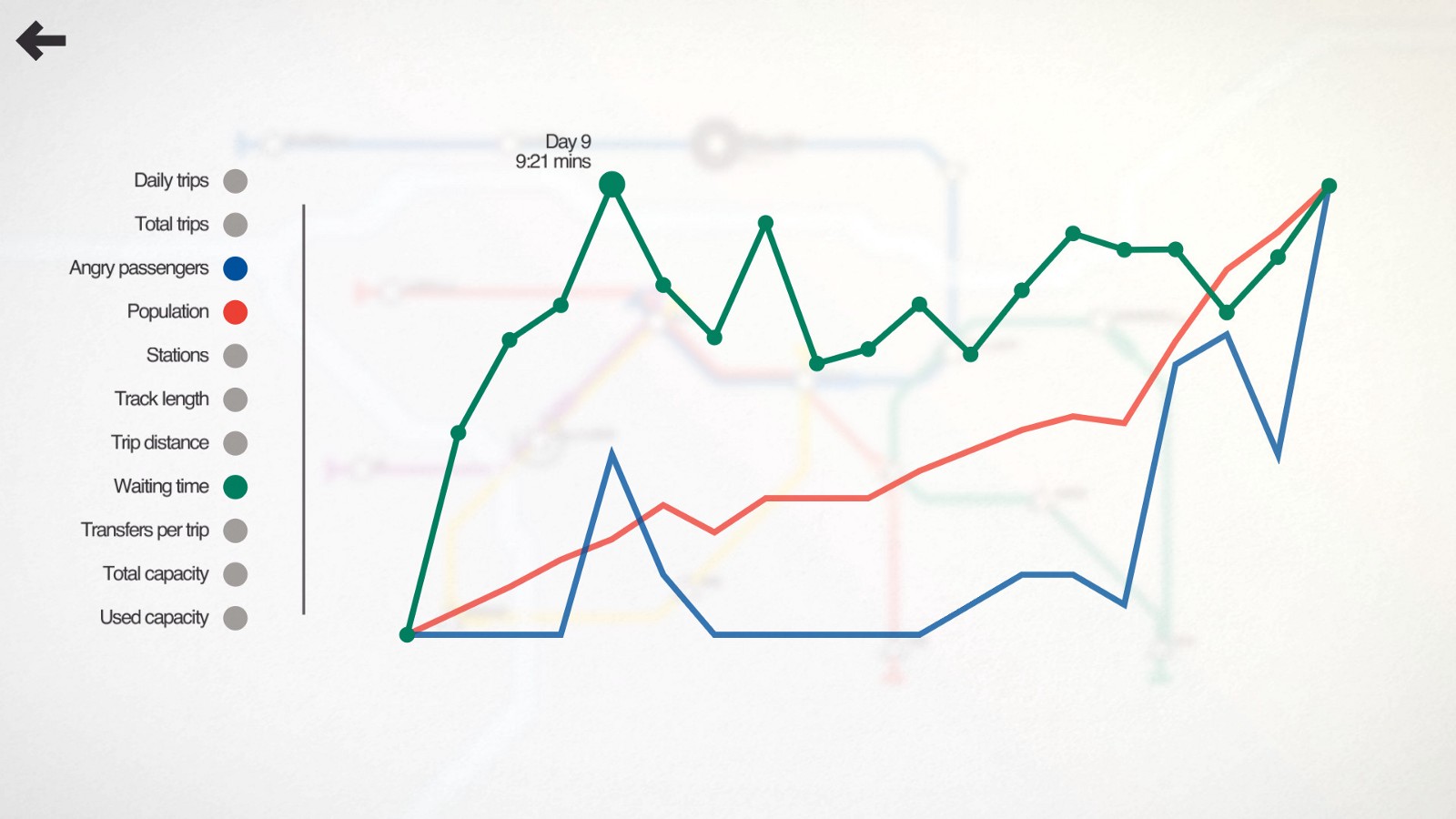 This isn't the only way in which the game works to keep players on their toes. My downfall has many a time been caused by a station changing its shape behind my back, or my failure to respond to an increase in the volume of passengers on a line. The game manages this in a way which never seems unfair  -  I've never seen the game over screen and felt cheated.

The game is available on both PC and mobile, and I would argue the latter is where it shines. Mini Metro can be played for any length of time; whether that's two minutes on the loo or for an hour on a bus during your daily commute. This is what makes a great mobile game great  -  the option to play anywhere, for any amount of time.

"Unlike Southern Rail, Mini Metro is a ride I want to be a part of"

One small frustration I've had with the game, however, has been the controls. For the most part the mouse control, or touchscreen on mobile, feels natural and works well. Removing a station from a line can be a little fiddly though, on both platforms, as you attempt to move the line away from the station. I get the thinking behind the control method used, but do think a simple right click or long press option would be superior.

As well as this, I would love to see additional mechanics in place to make the game more interesting. In its current state, I feel Mini Metro does not fully take advantage of its level selection, as though each is trickier than the last, these difficulty increases never seem very obvious. Most contain identical elements: trains which go the same speed, carry the same amount of people and have few differences, other than perhaps where the rivers are. I would love to see the game implement customizable game modes, such as allowing the player to select how many lines they start with, what speed the trains can go at, and more.

Despite these minor niggles, this game is still one of my all-time favourite puzzle games. With its beautiful design and well thought out mechanics, Mini Metro keeps a permanent place among my phone's games, perfect for any time I have a spare few minutes, or find myself on public transport. Because unlike Southern Rail, Mini Metro is a ride I want to be a part of.

Perfect for fans of Tetris or SimCity